A mask is required to enter the building. One person is able to accompany the pet into the exam room. Our waiting room remains closed so you may be asked to wait in your car until the veterinarian is ready to see you. Curb side service is also available.

Would you like to switch to the accessible version of this site?

Don't need the accessible version of this site? 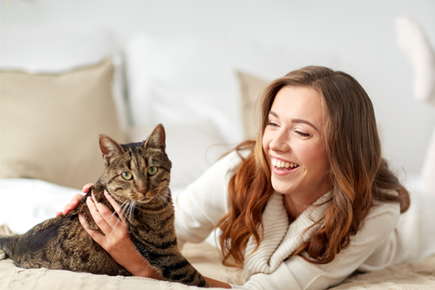 Zoonosis refers to diseases that can be transmitted to humans from animals. In particular, they occur when an infected animal passes on bacteria, parasites, fungi or viruses to humans through scratches, saliva, feces and urine. Vectors (e.g., organisms like fleas and ticks) can also carry zoonotic diseases from the host to those they come into contact with.

Bartonellosis, also known as cat-scratch disease, occurs when a person is scratched or bitten by an infected cat. Fleas and ticks may also aid in transmission.

Of all bacterial infections that can be passed from feline to human, this is considered the most common, affecting roughly 25,000 people per year in the United States alone. Those infected typically have swollen and inflamed lymph nodes, particularly around the neck, head and upper extremities. Other symptoms include:

Healthy individuals who contract bartonellosis tend to recover and have no long-term effects; however, the disease may take several months to disappear completely. People with immune deficiencies are at greater risk of suffering more severe consequences, however. In some cases, death has resulted.

Another bacterial disease that can be transmitted is salmonellosis. Though often caught by eating contaminated food, cats that eat raw meat or wild birds can carry and pass the bacteria in their feces, causing fever, diarrhea and stomach pains in humans within one to three days. This particular bacterial disease tends to resolve on its own, but, in the event of severe dehydration or in the event that the infection reaches the organs, medical attention will be necessary.

While fleas and ticks are external parasites that can cause inflammation and itching when they bite humans and can also act as vectors for bartonellosis and other zoonotic diseases, the focus of this section will look at feline intestinal parasites, such as roundworms and hookworms, which are transmitted to people through fecal exposure and have the potential to cause diseases of the eyes and other organs.

In most cases, intestinal parasites are contracted when litter boxes are handled and the person places their hands in their mouth or on their face without having washed or thoroughly washed them first. Exposure can lead to a host of symptoms that include:

Protozoans are single-celled organisms that have animal-like characteristics, such as being predatory and motile. There are three common protozoal diseases that can be transferred from cat to human: giardiasis, toxoplasmosis and cryptosporidiosis.

The protozoans come into contact with cats—and are later transmitted to humans—when a cat consumes an infected bird or rodent. Contamination can also occur if a cat eats feces expelled from an infected cat. In all cases, the infected cat expels the parasite in its feces for up to two weeks, at which point, the parasite takes one to five days to mature before being able to cause infection.

Handling an infected cat’s litter box without thoroughly cleansing one’s hands can be the catalyst for protozoal infections, as can improperly washing fruits and vegetables that have been grown in an environment (soil) where infected cats, birds and rodents drop their feces.

The main symptom associated with protozoal infections is diarrhea; however, medical attention may be required for people with immunodeficiencies, as they may develop severe illness.

Fungal infections, such as ringworm, often develop in cats when they live in environments with a large number of animals. Though the name ringworm would lead one to believe the infection is caused by a worm, that is not the case; it is actually a skin infection brought on by a group of fungi.

When a human pets an infected cat’s skin or fur, or if fungal spores are dropped through the shedding of the cat’s skin cells or fur, the infection can be passed along. In cats, ringworm comes in the form of a gray, dry, scaly patch of skin. In humans, it often presents as a red, round, itchy lesion with a ring of scale surrounding the perimeter.

Many viruses can only be passed from species to species, such as human to human or cat to cat. However, rabies is a viral disease that can cross species and, when it comes to human-cat interaction, it results when a human is bitten by an infected cat.

Cats are very vulnerable to this disease. Symptoms vary, but often affect the central nervous system. While rabies is almost always fatal for cats, the same is not true for humans. Still, symptoms in humans can range from mild to severe, and include:

Those with compromised immune systems (i.e. young children, pregnant women and the elderly) are more susceptible to zoonotic diseases, but healthy people can be affected too. While zoonotic diseases are rare—humans are more likely to catch diseases from other humans than from their cat—there are precautions you can take to lessen your risk, including:

If you have any questions about zoonotic diseases or think your cat may be suffering from one, call our office today.

This is just a placeholder. You can add some components or content in the sidebar partial.